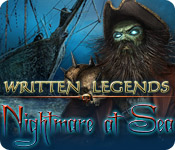 
I thought he was joking. He looked at me deadpan, those blue eyes reaching into mine. I stared back at him. I felt a chill creep through me as he carried on talking in the same tone about the Golden Age and civilisations where incest was the perfectly natural way of things; it was just a question of what was presently fashionable in society. I looked at Tom, whose jaw was hanging open. She kept nodding nervously and saying to me, "I used to think like you, I used to think it was wrong, but he showed me, he'll explain…".

I stared at Michael in total confusion, trying to maintain my bearings when it felt like the world was turning upside down. And then I looked to Anne — she was part of it. At least she had the grace to look ashamed. Susie was two years old, lying asleep next door in their bed. Michael was still talking.

Our Daytime Nightmare at Sea

This man was proud of his actions. I couldn't bear to be anywhere near him, he repulsed me. Everything he said disgusted me, his dreadful catchphrases: In the days that followed, we were pretty silent. We whispered long into the night, making plans to kidnap Susie. I'd try to snatch moments with Anne, telling her she had to escape.

She was quiet and sullen. Tom and I spent the time scanning the horizon for signs of life, for a place to get off. We were going nowhere. We froze Michael out and he didn't like it. He knew he had lost us. Anne became more and more cowering, wincing when he yelled at her.

Towed out to sea

Susie was clearly confused as to why the atmosphere had changed. Four awful awkward days passed, but finally the wind came and we were able to get moving. The relief as the twinkling harbour lights appeared out of the darkness, the white mosque wailing us in.

I kissed and hugged Susie goodbye, feeling so treacherous that I was leaving her and her mother in his hands.


I felt truly broken. We remembered someone Michael didn't like: We hitched round the coast to the boatyard to see if he was still there, whether he knew what was going on. They took us in and we told him everything, no detail spared, word for word what Michael had said and done. Pete went very pale and still.

Then he lost it and flew into a rage. He told us that he was going to kill Michael. Over the next few days, things really started to kick off. They were plotting how to "get rid of" him. They came up with several plans There was a moment when I realised that they were serious: Pete produced piano wire and lead weights to sink the boat. Besides, Michael himself was a policeman.

I wonder where that little girl is now. I've tried to track them down a couple of times to no avail. Order by newest oldest recommendations. Show 25 25 50 All. Threads collapsed expanded unthreaded. Stylized graphics that suit the game. Does not fill the whole screen. Will sparkle for you and the HINT will help you out here. Fine, but not great. The other control is mainly for mouse-click action. A lack of general ambient sounds, like bubbles etc. Will circle any area that has something for you to do, at any point.

Scour the scenes top to bottom, and see when your cursor changes to find stuff. Only 1 mode of game play. Helps you get your bearings only. NOT travel and but will highlight an area you need to go to. They are Davy Jones, his barnacled skivvies and trapped souls. Pleasant intermittent interaction which helps you on your quests. No voice-overs or lip-sync; you read. Rated 5 out of 5 by coha92 from Love it! I was entertained for several hours playing Written Legends: The graphics, the music, the story were superb!

I love the fact that it has hints so if I'm stock in something I don't have to leave my game to find the walkthrough in a website. The objects were somehow easy to find. I love to play without stress and this game gave me a relaxing sensation after a hectic week of work.

Girl Stranded on a Deserted Island!

I was so engrossed by the game that it was a complete shock when my hour ran out. It will definitely be worth the price to continue and finish the game. The rest was calming and appropriate for an underwater adventure. I appreciated the lack of voice-overs while interacting with characters. I prefer to read the text at my own pace. The task log and map are very helpful. It led me to task completion areas and not to the missing links that I was seeking. There were 6 HOS during the first hour alone. I would rate them as being easy. Nothing is hard to find or hidden slightly off-screen.

The ocean creatures were a welcome touch and I had a giggle at the pilot character being named Janeway. Everything worked and the Notes, Clues, and Map made it really easy to figure out where I was and where I needed to be. The mini games were not too hard and neither were the HOS.


I rarely had to use the hint button, and only at the very end did I need to check out the walk through. I pretty much played it in one sitting, which may explain why, by the end of the game, I was not thinking as sharply as I should have been. When I have to refer to the walk through to figure out the next step, then my opinion of the game goes down a little. I hate not being able to figure out where to go to play the next HOS or puzzles.

It's one thing to be unable to solve a puzzle or figure out how to use an inventory item and a whole other issue not knowing where to go to play next.

Our Daytime Nightmare at Sea

The latter issue just drives me crazy. The storyline was great and the graphics very good. I never play with sound, so cannot comment on that area. All in all, an excellent game. I love the visual effects and puzzles but for some reason whenever I hit the "pause" button and resume the game, it freezes up! I have to exit out of the game and re-enter it to continue playing. I loved this game. The game had a good story line and there wasn't too much going back and forth to complete tasks. The HOGs were clear as were all graphics, can't say anything about music because I always turn the music off.

The only turn offs were: I would highly recommend this game!! Rated 5 out of 5 by virtualadventure from An underwater adventure I love games that are under the sea! The sceenery is colorful and the graphics look exceptional. Your character needs to talk to the other characters in the game to get hints and find out where to go next. There is a lot of backtracking and wandering around but the game has directional hints available to aid you if needed. This game was so much fun and i really enjoyed it! Rated 5 out of 5 by LavaReign from lots of fun to play A free map is included with this SE, and it highlights areas which lead you to the next step so it's very helpful!

The map and subtle sparkles took a lot of the stress out of the game and eliminated the need for hints. The underwater graphics were beautiful. I didn't mind the characters repeating themselves, and the helpful "lost souls" added a feeling of community to the game. HO scenes were delightfully simple, even if objects were replaced on subsequent visits. A minor complaint, some of the adventure tasks required items that I had already used, gloves, an axe, a wrench, but I had to go find new ones again.

Tasks could have benefited from a little more imagination, or at least let us use more the similar items over again. The pesky octopus was a cute addition though. The adventure itself was nice, I enjoyed the storyline even if I've heard similar ones before, and the tasks made logical sense so there was a feeling of accomplishment after completing something.

Rated 5 out of 5 by jw from A Great Game! This game was the most fun I've had in a while. The story line was great, the puzzles challenging but not too-o-o hard, and it lasted just long enough not to get boring. The graphics were the best I've seen in any game and the sound effects and music were awesome! Best game I've played in a long time!